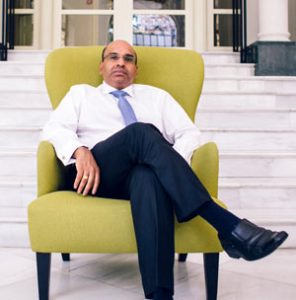 Selva Pankaj has turned Regent Group from a side project into a thriving education business.

When Selva Pankaj launched Regent Group with his wife and father in 2000, the idea was little more than “a dinner table conversation”. His father had wanted to provide community oriented education in Harrow, the London borough the family moved to in the early 1990s, shortly after emigrating from Sri Lanka. For Selva, though, the day job remained the priority. An accountant in the private equity and investment division of Prudential, the US multinational, he commanded a six-figure salary, working on what he understatedly describes as “massive deals”.

But in 2006 everything changed: Selva’s father died unexpectedly in an accident, altering Pankaj’s outlook irrevocably. “That was a real turning point, whether to carry on doing what I did in the City or to really take the legacy forward that my Dad started.” That legacy, he says, was one of seeking to build “character” through education. “Dad genuinely wanted to push that message forward and I always had the same vision and ethos about it.”

For the next three years Pankaj juggled being a director of Regent Group with his day job, until finally, in 2009, he quit to become full-time chief executive of the group (“a very difficult decision”, he concedes).

By that time, the group had grown to comprise a private sixth-form college, tutoring centre and nursery, but it only generated revenues of about £1.7 million. Pankaj, however, “planted the seed for growth”, and in the last five years Regent has burgeoned tremendously. It now encompasses the independent sixth form colleges Albany College, Burlington College and Regent College; a higher education division (which is part of Regent College); an apprenticeship arm, Regent Skills Training; three tutoring centres and the Regent Nursery School.

Business savvy
With about 1,700 learners overall, the firm is doing nicely: last financial year it turned over £6.3 million and posted earnings before interest and tax of £2 million. “We achieved that growth during a very difficult recession, too,” notes Pankaj.

While Pankaj may have left finance behind, he certainly hasn’t abandoned his business acumen, deploying clever pricing models and marketing strategies. Regent’s sixth-form colleges, for instance, charge fees in the region of £10,000 a year: comparatively low for London, but accessible to a lower income demographic increasingly priced out of private education.

Pankaj also incentivises his teachers with performance-related pay and team bonus pools, something that helps retain talent while keeping the business nimble. “We keep the salary costs down and base it more on meeting key performance indicators… In a very tough year we would survive.”

Regent Group makes the majority of its revenue from its HE arm, which only delivers higher national diploma (HND) courses, although the firm faces the same challenges as every other ‘alternative provider’ (AP) in the sector right now. Due to runaway uptake of student loans, the business department (BIS) will subject the whole AP sector to a retrospective cap on places in 2014-15, requiring providers to recruit at 2012-13 levels (more on page 24).

Pankaj would see a modest reduction in students next year, but believes Regent’s allocation will be “ample”. “We’re not seeking aggressive growth and will stick at this level for the next few years, whether the cap is removed or not”. Still, while he praises the government for opening the loans system up to APs back in 2011, he wishes it had done so more gradually. “If you give people no controls, they can go crazy and be greedy.”

Spread your bets
Higher education is only one component of Regent’s business model, of course. Pankaj points out that Regent is doing an increasing amount of work in skills, subcontracting with the Skills Funding Agency to deliver apprenticeships, for example (this, he notes with a smile, is “subject to no number controls”) for example. It’s also expanding its tutoring centres and sixth-form colleges, as well as entering new areas like special educational needs. “Within three to four years we will increase our turnover to about £15 million, with an ebitda of £4-5 million,” says Pankaj.

Another area exciting him is free schools. He has set up the Innovation Academies Trust with some former City colleagues and his first school was due to open this autumn in Wembley. Plans for a site fell through, though, so the ‘Gateway Academy’ is rescheduled to open next year.

Perhaps ironically for someone who only moved to the UK in the 90s, Pankaj says the inspiration for the school was the lack of “British values” he sees in Wembley’s schools. “Before we applied to set up a trust, we did our research on Wembley and the neighbouring areas, and found that about 200-odd languages are spoken there. But nobody was really promoting or fostering British values. I wanted to change that.”

Some investors reading this will be rolling their eyes; don’t all providers make such pronouncements before selling up and cashing in? But Pankaj has years of experience working in private equity and says he’s sceptical about the industry’s presence in education. Private equity can increase quality in a business, he says, but its emphasis on profit can be damaging. “Most private equity houses are funded by institutional investors or pension funds, so they are under immense pressure to turn a profit on their investments. Ultimately the numbers have got to stack up; they can’t make the decisions we can make, it’s impossible.”

Exacerbating the problem, he says, is the fact that many education businesses aren’t property backed. That not only leaves them vulnerable in periods of lower demand; their investors can only derive value from the bottom line, too, by raising fees for example. “It’s the only way you can realise your gain and that’s where the conflict comes in.”

For this reason, Regent Group has structured its business “carefully” and owns or has long leaseholds on all its property. Pankaj also hopes to take matters into his own hands by starting up his own, ‘ethical’ investment fund. This would source capital from high net worth individuals – rather than “return oriented” institutional investors – and plough it into educational ventures.

“We wouldn’t be an alien private equity house that doesn’t understand education,” he says. “We would say: ‘we understand your ROIs and IRRs, but we equally understand that this is ultimately more than just a business’.”

The idea is still at its “early stages”, but Pankaj believes it has potential. Certainly, the arrival of another education-focused investment vehicle in the UK would be welcome; one with such an agreeable ethos, even more so. In the meantime, Pankaj seems content to continue building Regent Group in the mould created by his father. “We want to leave a legacy,” he says. “We’re not just here to make millions and millions.”